Recently, there has been much excitement in the survey community about the development of drones with RTK and PPK capability.  But what is RTK and PPK?  Is one better than the other and what benefits do each bring?

Over the past few decades, we have seen the development and adoption of Global Navigation Satellite Systems (GNSS) by many industries that rely on accurate positioning for their activities.  We often hear people refer to GPS and this is just one of several satellite constellations, that in simple terms, continuously broadcast a data stream that allows for locating a position on the earth (there are other satellite constellations such as GLONASS, Galileo, Beidou etc.).

GNSS systems by themselves provide for a relatively low accuracy which is constantly improving but for most intents and purposes is 5-10m at best of the actual position.  This may be referred to as a raw or autonomous position.  In many cases, this accuracy is fine for simple navigation purposes such as marine and aviation navigation.  But in some cases, users needed far greater accuracy and thus the concept of Differential GNSS (DGNSS) was developed. 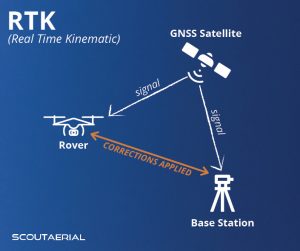 The concept of DGNSS can be applied in one of two methods.  It can be applied in real time, by transmitting the correction (by radio or mobile network) from a base receiver on a known point to a rover receiver that is measuring positions. This is called Real-Time Kinematic or RTK survey.  Once a position is recorded, you have the corrected position.

RTK is mostly used in field surveying and is reliant on a good signal between the base and the rover.  Sometimes it is not possible to maintain a good signal between the base and rover.  Terrain, vegetation, buildings and powerlines are just some of the features that can obstruct the signal.  When using the RTK method, you may need to move your base or use a signal repeater to overcome such issues.  Sometimes it is not practical to be moving a base station and where this is the case, we need another method to correct the position of the rover. 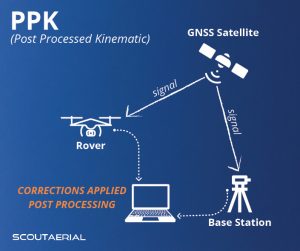 The alternative method for applying the corrections to the position of a rover is to do so after the  survey is complete.  In this method, both the base and the rover continuously log position data and corrections from the base receiver are applied to rover positions using the time stamp information from both receivers post survey.  This is referred to as Post Processing Kinematic or PPK survey.

PPK survey is most suited in environments and situations where a continuous connection between the base and rover is not possible.  Until the rover positions are corrected using the base station data, the positions collected are essentially raw or autonomous.

RTK and PPK for Drone Surveys

When it comes to surveying with a drone, both RTK and PPK allow users to accurately locate the position of a drone without having to rely on surveying ground targets.  Ground control targets are still used but serve only to calibrate the photogrammetric processing of the results and to bring the data onto the project datum.  As such, far fewer targets are required and the overall accuracy of the data is afforded by the accuracy of the drone positions and not the number of control points used.  End users can have far greater confidence of in the accuracy of data at any locations, regardless of the location of ground control targets.

In terms of benefits, both RTK and PPK methods provide for a reliable means to ensure accuracy of output data.  While the same level of accuracy can be achieved with methods that  rely completely on ground control targets, experience will show anyone who applies this method that the ideal configuration and quantity of targets is often not possible. Using RTK/PPK methods further improves the safety of field workers as they no longer need to access high risk areas to establish targets. It has also significantly improved the speed at which a drone survey can be executed as the reduced requirement for number of ground control targets saves time.

As Satellite Based Augmentation Systems (SBAS) technology improves, there is every likelihood that we will be able to achieve high accuracy solely based on satellite ephemeris data received by a rover, thus doing away with the need for a base station altogether. This would make things much simpler but by no means diminishes the continued requirement to have appropriate quality and accuracy checks in place when we deliver to our clients.

At Scout Aerial, we are committed to providing reliable, accurate and valuable insights using our wide-ranging experience and expertise. We partner with our clients to better understand their context and requirements to produce results that can be trusted and build relationships that last. 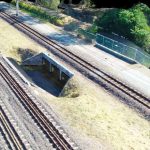 Strengths and limitations of PhotogrammetryArticles 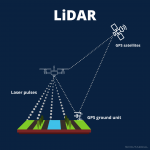